Biomarkers, how they influence the understanding of health conditions, and Alzheimer’s biomarkers 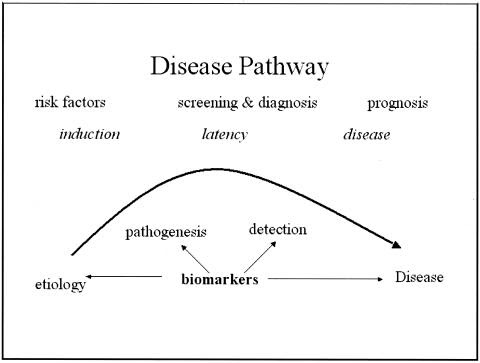 A simple graphic from a paper published in the journal NeuroRx demonstrating a possible use of biomarkers in disease pathway.

When it comes to research, there are generally three types: basic, translational, and clinical. Basic is also known as bench science; these are the researchers studying the granular foundational elements of a specific disease by which we can apply this knowledge to develop hypotheses for prevention and treatment. Then there is clinical research where patients are enrolled into clinical trials to evaluate therapies, prognosis, so on and so forth. Perhaps the least commonly discussed among non-scientists is the linkage between basic and clinical research: translational research. Translational research is where the scientific community goes from identifying a gene of interest to evaluating hundreds, thousands, or even millions of potential compounds, including high throughput screening of already FDA-approved compounds, to animal models, to eventually clinical trials. This blog, which does touch on some essential elements of clinical trials, is not an overview of the clinical trial process, but I will likely write a blog about clinical trials in the future. Much like how a condition cannot be considered in a vacuum without also considering the full scope of normal biologic processes and the environment surrounding the person with the condition, no type of research can be considered without understanding the other types. Biomarkers and diagnostic tools are not divorced from basic and translational research.

From the National Center for Advancing Translational Research (NCATS), biomarkers are “are characteristics that can be objectively measured and used as an indicator of normal biological processes, disease processes, or pharmacologic responses to a therapy” and they “are important for the development of drugs, biologics [therapeutics that don’t fit neatly into other therapeutic designations], and certain medical devices.” 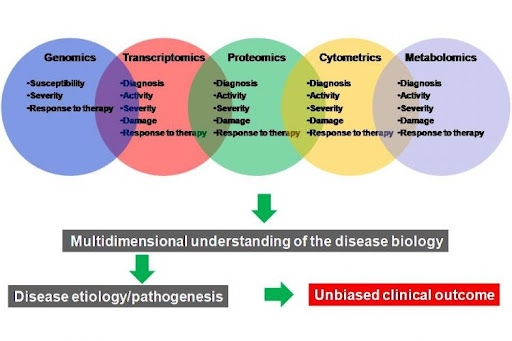 From a study published in the journal European Pharmaceutical Review, this graphic highlights a “multi-omics approach for the discovery and validation of biomarkers to probe multidimensional phases of disease biology.’

Biomarkers aren’t always complicated measures; basic measurements like height and weight are biomarkers. Ratio measurements, such as BMI, are also biomarkers. Not all biomarkers are the same in terms of clinical and scientific quality, however. BMI has become an increasingly controversial biomarker as it has been historically used to diagnose obesity, but obesity is not just a measurement of weight but also a measurement of fat on a person. BMI can be skewed by muscle and can misleadingly imply people with lean body mass are considered obese, while sometimes misclassifying people who have been diagnosed with obesity using other biomarkers as not obese. Biomarkers also should not be considered independently but collectively with other biomarkers and clinical evaluations of a patient’s scope of health.

There are a couple of different ways to classify biomarkers as indicated in the tables below. The caret (^) in some cells indicates those are from this fabulous article on NCATS’ website about biomarkers.

Classification System 1: By how they are measured

Classification System 2: By what they measure

In Alzheimer’s research, biomarkers are heavily studied and highly coveted. The Alzheimer’s Association opens up their page on biomarkers with a sobering yet optimistic acknowledgement of the current state of affairs for AD biomarkers: “Although there are no validated biomarkers for Alzheimer’s disease, researchers are investigating genetic risk profiling, cerebrospinal fluid biomarkers, such as beta-amyloid and tau, and advanced brain imaging techniques that will allow clinicians to detect and monitor genetic, metabolic, vascular and cellular changes related to Alzheimer’s disease.”

As pointed out in a review of Alzheimer’s classical and novel biomarkers, “the term [Alzheimer’s disease] is applied whenever there is biomarker evidence of presence of [β-amyloid (Aβ)] plaques and [neurofibrillary tangles (NFT), which are fibrillar deposits of hyperphosphorylated Tau protein (p-Tau)].” Since AD can only be clinically diagnosed posthumously, patients are not diagnosed with AD; they are diagnosed as “possible Alzheimer’s dementia.” For this very reason, biomarkers play a pivotal role in the diagnosis and treatment of Alzheimer’s as they are the only way to evaluate the likelihood somebody may have AD.

The National Institute of Aging has put together this great explainer biomarkers used in Alzheimer’s research but I’ll briefly explain the types of biomarkers used below.

When it comes to imaging, CT (computerized tomography) scans, while rarely used, can be used to “diagnose dementia based on changes in the size of particular brain regions.” MRIs are often used in AD research and clinical trials to be used to potentially “identify some causes of dementia symptoms, such as a tumor, stroke, or head injury” or to discern if areas of the brain have shrunk. As there are different types of PET (positron emission tomography) scans, they can evaluate a handful of biomarkers such as fluorodeoxyglucose, amyloid, and tau. PET scans are more commonly used in research rather than clinical research as they are more helpful for evaluating risk for Alzheimer’s than they are for diagnosing the condition.

EEGs, too, have been studied for potential use in AD biomarker research. In one paper published on the subject, the authors remark their results “suggest that EEG changes in AD may start with localized changes in temporal areas.” Research into EEGs as tools for evaluating AD biomarkers remains a popular research topic.

As for cerebrospinal fluid, which is obtained via a lumbar puncture, the NIA explains: “Proteins and other substances made by cells can be detected in CSF, and their levels may change years before symptoms of Alzheimer’s and other brain disorders appear.” The biomarkers found in CSF are beta-amyloid 42, tau, and phospho-tau, which make up the amyloid plaques and tau tangles so infamously associated with Alzheimer’s disease.

Other molecular biomarkers, found through genetic and blood tests, are less reliable, although they are continually studied with the hope that simpler-to-obtain and more objective biomarkers will be found.

My objective with this blog post was to convey just how interconnected the worlds of disease pathology and research are. To put it simply, the brain is a part of the body and the our bodies are part of an environment which we exert influence upon just as we ourselves are influenced by the environment. A core goal of research is to draw the thread between the realms of pathophysiology and clinical treatment.

It is not simple to understand the etiology of any condition so we must seek to find formalisms by way of biological markers to interpret health conditions in as objective way as possible. We do this by researching the foundational concepts through basic research, then we utilize models that ideally emulate the clinical implications (and reduce safety concerns) through the use of translational research, before we finally evaluate the implications of any given research question in a human population. As researchers, our northern star should always be improving the lives of humans, otherwise no medical question makes much sense. To do this, we search for and evaluate biomarkers that are as objectively strong as possible to prevent, diagnose, and treat conditions.